Dieters opting for low-calorie fizzy drinks to help boost their weight loss may see their waistlines expand instead, 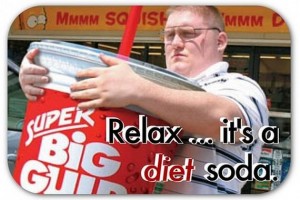 Rather than encouraging the pounds to drop off, a new study has shown regularly drinking diet sodas adds inches to a person’s waist measurement.

Scientists at the University of Texas examined the lifestyles of 749 Mexican-American and European-American people, over the course of nine years, in which 466 participants survived.  They tracked the number of fizzy drinks each person consumed, and whether or not they were diet drinks.

They found those who indulged in at least one diet drink a day gained at least three inches to their waistlines.  The participants were interviewed at the beginning of the study and at three follow-up visits, where researchers measured their waist circumferences and other parameters.

And for the group who said they consumed diet fizzy drinks every day, often more than once a day, waist circumference increased by more than three inches.
(continue reading)