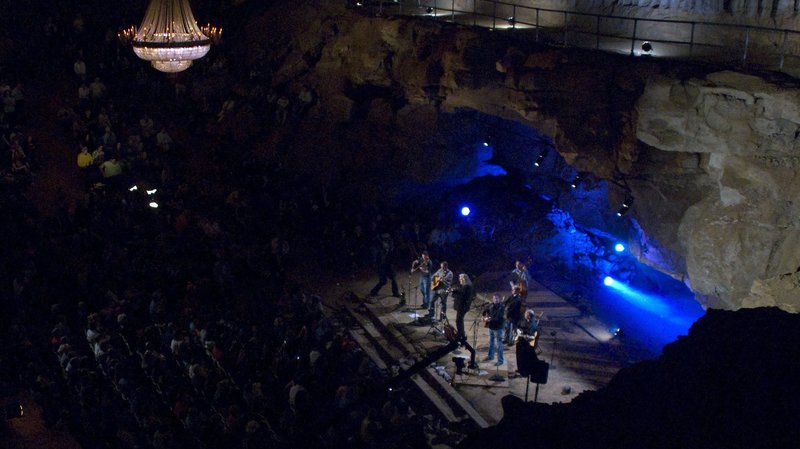 In Tennessee, a four-lane highway turns into a winding strip of asphalt called Dark Hollow Road. That becomes a driveway, and once out of the car, there’s still a ways to go through the dense forest on a hillside. There, we find Cumberland Caverns, now host to a stage 333 feet underground.

Water and time carved out a rotunda nicknamed the Volcano Room that accommodates 600 people, albeit barely. Some perch on rock outcroppings by the stage. Neon lights accent the limestone walls. A giant chandelier hangs from the craggy ceiling.

Today’s headliner is the Annie Moses Band. Fiddle player Gretchen Wolaver says she assumed the venue would be more like an outdoor stage under a rock overhang.

“When you first walk in, you think, ‘Wow, this is really a cave,'” Wolaver says. “Which you would think you would have thought that anyway, but I didn’t.”

There are pros and cons to the subterranean setting. The sound, for one, is unexpected. This vaulted cavern doesn’t create the echo-y hall you’d expect. House sound engineer Andy Kern says the cave’s uneven surfaces scatter the sound waves and break them up just like in a specially designed studio.

“You know, you always think of the three-second reverb time — the ‘hello, hello, hello’ that just goes on forever — and it’s the complete opposite,” Kern says.

Then there’s the temperature. (continue reading)