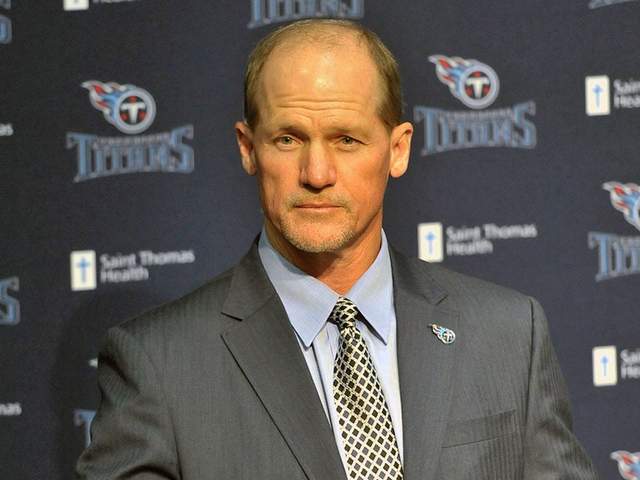 The Ken Whisenhunt era is over with the Tennessee Titans.

Just 23 games into his tenure as head coach, Whisenhunt was informed on Tuesday morning the organization wants to go in a different direction.

The final decision came just two days after the Titans lost their sixth straight game, in Houston, where the team’s ownership group watched from the visiting owner’s suite at NRG Stadium.

“After thoughtful consideration, the decision has been made to relieve Ken Whisenhunt of his head coaching duties,” said Titans controlling owner Amy Adams Strunk. “We have expected more progress on the field, and I felt it was time to move in a different direction. I would like to thank Ken for his efforts with our team, as he worked very hard to try to move us forward.”

Mike Mularkey, who served as assistant head coach/tight ends under Whisenhunt, will take over as interim coach. Mularkey has 20-plus years of NFL coaching experience, including three seasons as a head coach. Mularkey served two seasons as head coach of the Buffalo Bills (2004-05), where he went 14-18, and one season as head coach of the Jacksonville Jaguars (2012). In his first season with the Bills, the team went 9-7 to post their only winning season in over a decade.

Mularkey was a highly successful offensive coordinator with the Steelers and Falcons. He joined the Titans as tight ends coach in 2014 before being elevated to assistant head coach in 2015.

A press conference is scheduled for Tuesday at Saint Thomas Sports Park.

Whisenhunt’s record with the Titans: 3-20. The Titans finished 2-14 in his first season with the club in 2014, and the team is currently 1-6. The Titans have lost 16 of their last 17 games dating back to last season.

Whisenhunt was considered a successful hire when the Titans signed him to a five-year deal in January 2014, making him the 17th head coach in franchise history. Most NFL observers agreed he was the top candidate available as the Lions, Vikings and Browns were also looking for head coaches at the same time.

Whisenhunt, after all, had taken the Arizona Cardinals to Super Bowl XLIII during his six years (2007-12) as head coach, and he won a Super Bowl ring as offensive coordinator with the Pittsburgh Steelers in 2005. He had success with quarterbacks Ben Roethlisberger (Steelers), Kurt Warner (Cardinals) and Philip Rivers (Chargers) during his previous NFL stops. Prior to joining the Titans, Whisenhunt posted a 45-51 record as a head coach.