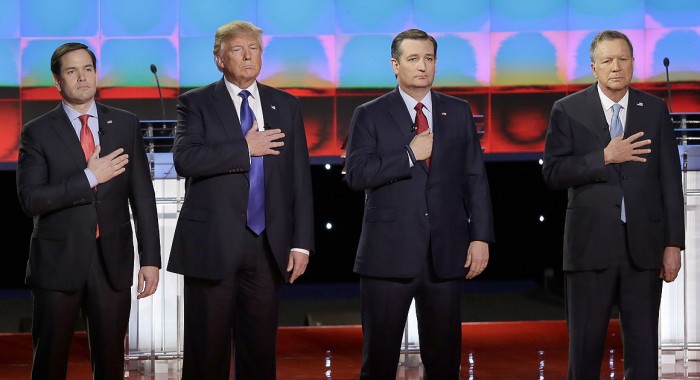 You can give it this much. The Thursday night GOP debate was civil, and probably the last one, too. Rubio is done, Kasich is on vapors and Senator Ted will never stop the Trump Express.

In short, The Donald didn’t blow it, and therefore he is the presumptive GOP nominee. And probably the 45th President of the United States. For better or worse.

Here follows an essay on the worse, as amplified in the Miami debate. What the latter showed is that the remaining GOP candidates represent the worst of both worlds and that The Donald was mainly right in the thick of it——echoing much of the same beltway bunkum, fibs, and falsehoods as the other three.

That is, to a man they wanted to extend the foreign interventionism and imperial over-reach which is bankrupting us at home and fostering mayhem and jihadist blowback abroad. Indeed, the saber-rattling got so far out of hand as to put you in a mind of a warmongers’ jamboree.

At the same time, they presented themselves as clueless, gutless wonders when it comes to basic fiscal math. Rather than addressing the painful policy choices that will be needed to avert the budgetary trainwreck rapidly hurtling toward American taxpayers, they offered up such rhetorical puffery as to make smoke and mirrors seem credible.

And that wasn’t the half of it. There was nary a mention—-let alone a full-throated attack—-on the real evil elephant in the room.

To wit, if you claim to have a plan for economic revitalization and jobs on the main street, yet don’t bother to lower the boom on the economy wreckers in the Eccles Building, you’re just tilting at windmills.

There has been a de facto Keynesian/statist coup d’ etat that has usurped both the free market and political democracy in America. It has put the essence of our economic and political governance into the dangerous hands of the 12 unelected academic scribblers and power-hungry apparatchiks who comprise the FOMC.

The latter has turned the nation’s printing press into an instrument of main street economic suffocation, even as it gifts Wall Street with unspeakable financial windfalls. So doing, it has destroyed honest price discovery in the money and capital markets and crippled the vital processes of efficient capital generation and allocation.

At length, the money printers at the Fed have caused the C-suites of corporate America to morph into stock trading rooms. There, trillions of capital have been strip-mined from balance sheets in order to fund stock buybacks, LBOs and empire building M&A deals.

Likewise, if you want to know why American productivity is crumbling and net investment is at modern lows, look no further than the foolishness of zero interest rates and QE. If you want to understand why savers are being punished and impoverished, while speculators are waxing in riches, you need merely to examine the Fed’s reprehensible doctrine of “wealth effects”.

Since the turn of the century, the balance sheet of the Fed has expanded from $500 billion to $4.5 trillion or by 9-fold. Yet the 71 million breadwinner jobs—manufacturing, mining, construction, distribution and white collar professionals and managerial——reported last Friday forFebruary was still a million jobs below early 2001 levels.

That is to say, for the better part of this century, the Fed has been conducting a monumental financial fraud. There is no other honest description for $4 trillion of public and GSE debt monetization in 15 years. Yet it has left 100 million households on the main street—-all except the top 15%—–struggling to make ends meet and facing a rapidly diminishing outlook for jobs and economic advance.

Given that damning bill of particulars, what condign punishment did our GOP debaters offer Janet Yellen and her destructive band of Fed money printers?

You might as well call it amnesty. Not one of them even mentioned the joint!

That’s right. Tens of million of savers and retirees have been criminally assaulted by an institution so far down the rabbit hole of monetary central planning that it has not even noticed that the nation is swamped under Peak Debt. Nor is it cognizant of the fact that this $62 trillion of public and private debt is now crushing what remains of capitalist enterprise in America, and that, accordingly, no amount of interest rate cutting can induce more borrowing by households that are already tapped-out.

Yet our GOP champions of restoring capitalist prosperity did not think to pin the donkey’s tail where it belongs. Namely, squarely on the nest of arrogant anti-market interventionists and statist usurpers who occupy the Eccles Building and who slavishly do the bidding of their Wall Street masters for fear of provoking a hissy fit in the casino.

And then it got worse. The only Washington faction more nefarious than the Keynesian money printers in the Eccles Building are the neocon warmongers scattered all around the Imperial City.

Indeed, they have so coopted the narrative and corrupted the intellectual and moral fabric of the nation’s capital that even a once and former son of the anti-interventionist middle border like Governor Kasich spent the evening foaming at the mouth about imaginary demons abroad.

Indeed, his shrill hawkishness was so pointless and ill-informed as to be downright embarrassing. Doesn’t the ex-Congressman know that the sand bars in the South China Sea are a folly of the failing regime in Beijing that have absolutely nothing to do with the safety and security of citizens in Dayton Ohio or any place else in America? Doesn’t he know that the Sprately Islands have been claimed by Chinese regimes since time immemorial, including by Washington’s stalwart cold war ally, Chaing Kai-Shek? (continue reading)