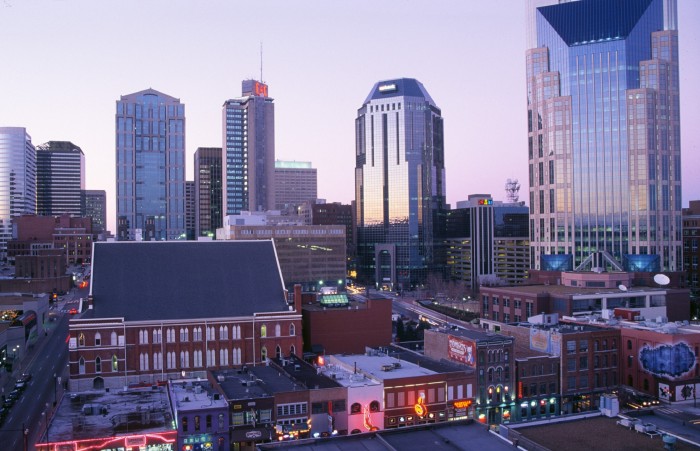 On a Thursday night like any other in Nashville, I got to see Music City — a town I’ve called home for the last 19 years — with a fresh pair of eyes.

This week, the two hosts of USA Today’s “Dad Rock” music podcast paid a visit to Nashville, and they asked me to give them a tour of the city’s music scene — in a single night.

They wanted to go “off the beaten path” a bit, so instead of The Ryman, Tootsie’s and The Bluebird Café, I took them to spots that, while not obscure, aren’t the most obvious picks for people visiting Nashville for the first time. In the process, I was reminded of what makes Nashville (and its talented, gracious residents) one of a kind.

The first stop on our journey was the Musicians Hall of Fame and Museum, a place dedicated to the instrumentalists, songwriters and producers behind iconic recordings. “Dad Rock” co-hosts Jim Lenahan and Patrick Foster got to stand inches away from the drum kit that was played on “Soul Man” and “Knock On Wood.” We saw the machine that Elvis Presley used to make his first record — a birthday gift for his mother. One of Jimi Hendrix’s guitars is on display, and I told Patrick and Jim how the musician gigged for years on Nashville’s Jefferson Street — back when he was “Jimmy.”

From that tourist attraction, we went to the most tucked-away spot of the night: The Bomb Shelter recording studio in East Nashville. Owner Andrija Tokic has been at the helm for the debuts of Alabama Shakes and Benjamin Booker, and we geeked out over his array of instruments and analog recording gear. Patrick and Jim marveled at the fact that this studio was hiding in plain sight on an ordinary residential street — a fact of life in Nashville that I often take for granted.

It was a short drive from there to another East Nashville fixture: The 5 Spot music venue. As I explained to them, the east side is teeming with musicians, and a local hang like The 5 Spot is a place for some very serious players to have a little fun. In this case, it was Fats Kaplin, a brilliant multi-instrumentalist whose most prominent gig is playing in Jack White’s touring band. But on Thursday night, he was playing classic country songs with his friends, which included singer/songwriter Paul Burch.

We regrouped back at The Tennessean offices before venturing into Lower Broadway. Yes, its line of honky tonks might be our town’s biggest tourist spot, but we approached it from a different angle — literally. Acme Feed & Seed is located at the far end of Broadway, just in front of the Cumberland River, and you can admire the neon glow and revelry of those bars from a healthy distance. The massive Acme complex has more than enough to dazzle on its own, anyway. On Thursday, it was hosting the “Road to Bonnaroo” competition, where local acts compete for a spot on the lineup of the Bonnaroo music festival in Manchester, Tenn. We spent much of our time holed up in the studio of Acme Radio, a real-deal Internet radio station that brings Music City sounds to the rest of the world.