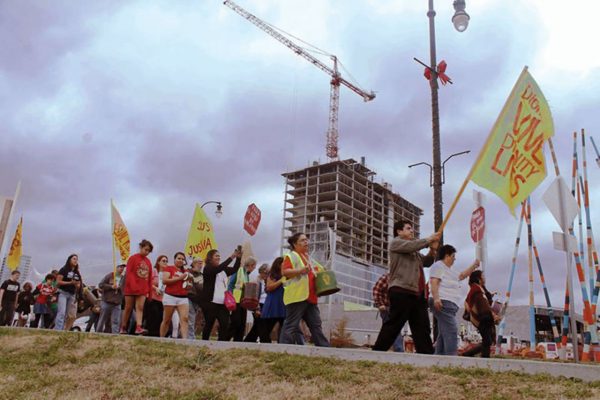 In the mood for some Southern hospitality? Workers’ Dignity — a nonprofit group of low-wage workers and allies organizing for economic justice — released a report Monday that details the conditions of hotel workers in Nashville, and it’s startling. On Monday evening during rush hour, they held a press conference outside the construction site for the Westin hotel in SoBro, for which the Metro Development and Housing Agency approved tax-incentive financing of $15 million in 2014.

Rosie, who asked that we use only her first name, says she injured her shoulder while making a bed at a major hotel. “When I hurt my arm,” Rosie tells the Scene through a translator, “I reported to my immediate supervisor. She said, ‘Finish out your day.’ I had 24 rooms I was cleaning. The second day, I came back. I had 30 rooms to clean that day. They made me work another week or two while I was in pain before I insisted that I go to the clinic.”

Rosie’s supervisors arranged to send her to a clinic, where she was told she was fine. The pain, she says, got so bad that she asked to take the weekend off. When she returned on Monday, she was fired. Rosie does not have health insurance but made an appointment at Vanderbilt anyway. “They did an X-ray and could see I tore something and had this blood clot in my shoulder. They said, ‘You have to have surgery. There’s no other way to fix it.’ ” Her injury happened in November, and her surgery is scheduled for this week.

Researchers from Vanderbilt University worked in collaboration with Meharry-Vanderbilt Community Engaged Research Core to survey 52 cleaning workers across Davidson County; 80 percent of these were housekeepers in hospitality. They found that despite an unprecedented rise in the tourism industry, the wages of housekeepers have not kept up. Their average wage is $8.36/hour and dropping below the national median. Ninety-four percent of respondents are living below the federal poverty line.

Tristan Call is an author of the report and Ph.D. candidate at Vanderbilt who volunteers with Workers’ Dignity. “They’re treating workers like they are a disposable good,” he says, “as machinery that can be brought in and taken out, rather than as people who can be invested in … who could have a long working life and then be able to retire.”

The findings are particularly distressing during the current hospitality boom: (continue reading at NashvilleScene)