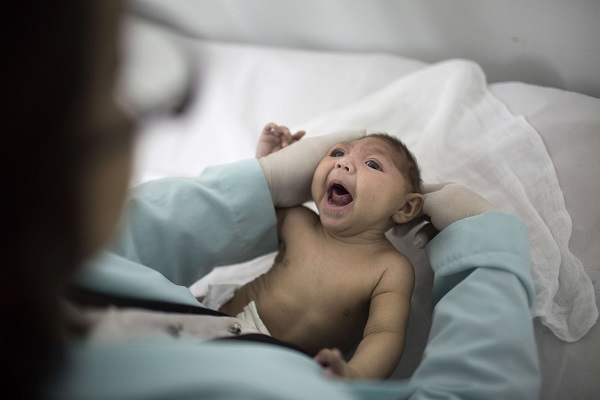 A baby born to a mother with the Zika virus at a New Jersey hospital appears to be affected by the disease, according to a doctor who helped lead the delivery team.

A woman from Honduras delivered the baby girl through a cesarean section Tuesday at Hackensack University Medical Center, said Dr. Abdulla Al-Kahn, the hospital’s director of maternal-fetal medicine and surgery.

The 31-year-old mother was diagnosed with Zika in her native Honduras after lab results were sent to the Centers for Disease Control and Prevention for confirmation of the virus, said Al-Kahn. She then came to New Jersey, where she has family, to seek further treatment, he said.

Al-Kahn said the mother had a normal ultrasound early in her pregnancy, and that another one last week showed birth defects, including microcephaly, in which the baby’s head is smaller than expected because the brain hasn’t developed properly.

The doctor said the baby looks “completely Zika affected,” and while further testing is required to confirm the virus, he’s “90 to 95 percent” sure it’s Zika.

“It was very sad for us to see a baby born with such a condition,” he said.

Al-Kahn said the prognosis for babies born with microcephaly, which also can signal underlying brain damage, is “generally very poor.”

The mother is (continue reading at WKRN)