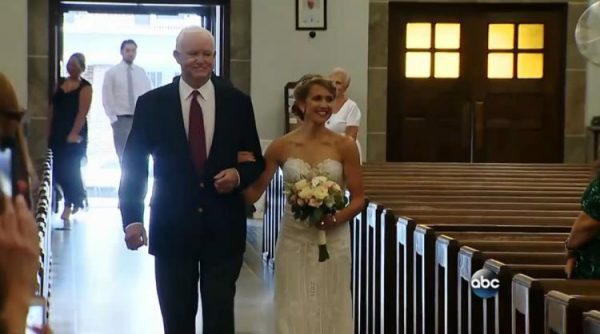 “Dear Tom,” the letter read, “I’m the daughter of the man whose heart is inside of you and I’m gonna get married on August 6th…And one further thing, if you’re willing; would you walk me down the aisle?”

That’s how 33 year-old Jeni Stepien began a letter to the man who carried her father’s heart inside of his chest.
Jeni lost her father, Michael, in a Swissvale shooting in 2006. It was one night in September when husband and father Michael Stepien was making his way through an alley between Nied’s funeral home and a volunteer fire department on his way home from work. Little did he know, three young men were lying in wait to rob him in order to buy marijuana. The youngest of the three, Leslie “Y” Brown, volunteered.

Brown rushed into the alley armed with a .22 caliber revolver. With the gun pointed at the Stepien’s head, Brown demanded the older man’s wallet. Stepien pleaded and said that he had no money to give, prompting Brown to fire two warning shots before making his demand again. Stepien repeated once more that he couldn’t help the young man. Enraged by the response, Brown shot him in the head before fleeing the scene.

It wasn’t until May of 2011 that Brown was arrested and charged for a string of armed robberies. Police suspected him in the alleyway shooting, but were only able to charge him once his two accomplices agreed to cooperate. One testified that Brown was arrested only a few days after the shooting when he attempted to rob a man at a bus stop using the (suspected) murder weapon. He also attested that he had asked Brown, after having witnessed Stepien’s murder, if he was “all right”. The then-16 year-old responded with, “I gotta do what I gotta do.”

Brown received a mandatory life sentence without parole for second-degree murder, two firearm charges, and robbery. Brown’s lawyer appealed to the State Superior Court in 2013, citing a life sentence without parole given to a minor as ‘cruel and unusual punishment’, and therefore in violation of the Eighth Amendment. The appeal was successful, and Brown is now serving a reduced sentence of 43 years.

At the same time, the Stepien family was doing their best to carry on with their lives without a central figure, but with a new, very special kind of friend. Even in light of this horrible tragedy, the family was able to cling to the knowledge that, through organ donation, Michael saved more than one life.

Mr. Arthur “Tom” Thomas, 72, had been awaiting a new heart for 16 years. He was “at death’s door”, having long suffered from heart failure, when the miraculous news was delivered: there was a donor.

He recalls contacting the Stepien family and thanking them on behalf of himself, his wife, and his four adult children “for this new lease on life,” and telling them that he realized their sacrifice was “extraordinary.” The two families maintained that connection over the years solely through letters and phone calls, with Thomas sending Mr. Stepien’s wife fresh flowers every holiday.

Though the families made sure to keep in touch, it wasn’t until August 6th of this year that they were finally able to meet in person. Thomas and his wife traveled from their home in Lawrenceville, New Jersey to arrive in Pittsburgh the night before the wedding. The long-awaited reunion was emotional, to say the least.

“It’s just like having my dad here,” Jeni said, wiping away tears, “and better because we get to share this story with other people and other people get to see that organ donors do matter.”

“I’m so excited,” she went on, “the whole family is here now. It’s like everybody’s here.”

So it was the very next morning, on the happiest day of her life, that Jeni’s dream came true. Surrounded by family and friends, the bride walked down the aisle of St. Anselm with a little piece of her father by her side. She paused at the end of the aisle, allowing her hand to rest over Thomas’s chest once more before taking the final step into her new life.

“It was so amazing,” she commented later, as reported by the Washington Post, “I could feel his heartbeat- it was so strong.”

And when it was time for the father-daughter dance, Thomas took her hand once again and led her around the dance floor as she had always dreamed that her father would.

“The last 10 years,” Thomas said, afterward, “I watched my children graduate from high school and college and I’m probably going to be able to see them get married. And that same 10 years, Michael’s family went without him.”

“I had a life to live because of him, and his family did not. It was important for me to do this very small thing for her.”