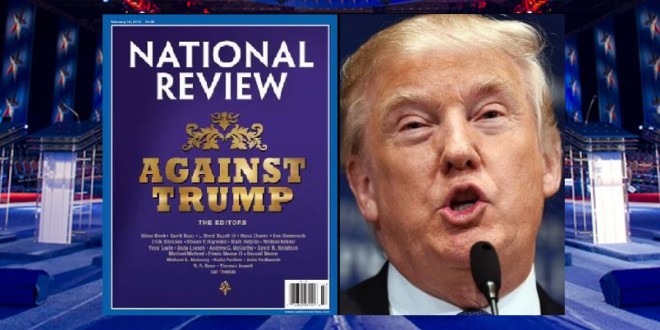 “Trump is a philosophically unmoored political opportunist who would trash the broad conservative ideological consensus within the GOP in favor of a free-floating populism with strong-man overtones,” the editors wrote. “Donald Trump is a menace to American conservatism who would take the work of generations and trample it underfoot in behalf of a populism as heedless and crude as the Donald himself.”

The Republican National Committee reacted swiftly — immediately revoking the permission it had given National Review to host a Republican presidential debate next month. “Tonight, a top official with the RNC called me to say that National Review was being disinvited,” the magazine’s publisher wrote online. “The reason: Our ‘Against Trump’ editorial.”

That soft flapping sound you hear is the Grand Old Party waving the flag of surrender to Trump. Party elites — what’s left of the now-derided “establishment” — are acquiescing to the once inconceivable: that a xenophobic and bigoted showman is now the face of the Republican Party and of American conservatism. (continue reading)